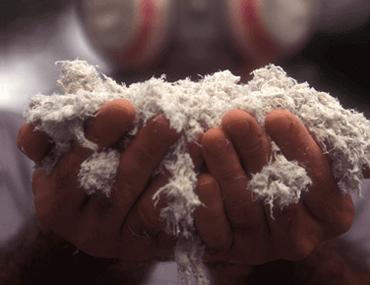 As pervasive as asbestos was in many industries, exposure was especially common for those who worked in construction, insulation, roofing, as well auto repair, miners, shipyard workers, and other trades such as maritime, oil refineries, power plants, and steel mills. This covers many occupations—mechanics, carpenters, electricians, maintenance workers, painters, engineers, plumbers, U.S. navy veterans, and many others. Outside of its use in many industrial products, it was also heavily used to build homes and schools, as well as in the products one would find in our everyday lives, including toys, hairdryers, paints, and even pots and pans. Indeed, it would be accurate to say that everyone has been exposed to asbestos at one point or another, some simply more so than others.

If you or your family has been affected by asbestos exposure, working with an experienced attorney dedicated to obtaining justice for mesothelioma victims is very important. Symptoms that result from asbestos exposure can take years to develop, and when pursuing legal claims related to that exposure, establishing that cause can be challenging, and typically involves working closely with specific experts. At the Throneberry Law Group, our team of dedicated mesothelioma attorneys have been working with Ohioi victims of asbestos exposure for years, and we know the ins and outs of litigating these types of claims. We are committed to our clients.

Studies have established that there are several factors strongly connected to a diagnosis of mesothelioma and/or other asbestos-related diseases, including how much the individual was exposed to, for how long, and other pre-existing factors, such as each immune systems and whether an individual has engaged in other behaviors that can lead to lung disease, such as smoking.

In 1970, the U.S. Consumer Product Safety Commission banned the use of asbestos in some products due to the potential for asbestos fibers to be released into the environment. Although the Environmental Protection Agency (EPA) also banned the use of asbestos in any new products in 1989, its uses and applications—as developed prior to 1989—were still allowed to continue in the U.S. The EPA also required that school buildings be inspected for the presence of asbestos and for the presence of asbestos to be reduced or eliminated in these buildings. Asbestos has now officially been classified as a known human carcinogen by U.S. and international agencies, and not only is mesothelioma the most common cancer associated with asbestos exposure, but some studies have also linked its exposure to the following cancers: kidney, gastrointestinal, colorectal, throat, esophagus, and gallbladder.

While the exposure to asbestos that many veterans endured is well-known, many do not realize that workers involved in the rescue and cleanup efforts of the September 11th (2001) attack on the World Trade Center also face an increased risk of developing diseases related to asbestos exposure. This includes the firefighters, volunteers, police officers, paramedics, and those who lived, worked, and otherwise resided near the site. There is no question that rescue workers, in particular, have suffered from severe respiratory issues as a result.

While it is established that regular exposure to asbestos causes severe health risks, studies have also found that brief exposure can also cause asbestos-related diseases. In fact, there is evidence that family members of those who worked regularly with asbestos also face an increased risk of developing mesothelioma due to asbestos fibers making their way into the home and being released into the environment.

The Throneberry Law Group serves Ohio mesothelioma victims from Columbus, Cleveland, Cincinnati, Toledo, Akron, Dayton, Parma, Canton, Youngstown and Lorain to name a few surrounding areas. Contact us today for a free consultation so that we can get started helping you and your family.

Contact us today for a free consultation so that we can get started helping you and your family.

Tell Us About Your Case and
Get A Free Consultation

At the Throneberry Law Group, we are here to help you and your family. Contact us today to hire Ohio, Cincinnati Mesothelioma Attorney.